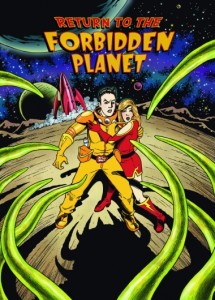 Doctor Prospero worked late one night developing a formula which could change the world. However, his wife Gloria bundled him off in an old spacecraft. Unknown to Gloria her daughter was asleep onboard. Fifteen years later, a survey flight commanded by Captain Tempest leaves Earth. As a shower of meteorites hits the ship, the Science Officer flees, and the craft is pulled towards the planet D’Illyria – The Forbidden Planet….

Why is quality such an anathema to sci-fi? The wobblier the sets, the dodgier the alien make-up and the sillier the scientific explanations, the more we take it to our hearts. 1950s and 60s B-movies are a case in point, Plan 9 From Outer Space standing out as as just one shining example of genuinely awful production values.

At a time when Star Trek was but a twinkle in the dark matter of Gene Roddenberry’s eye the genre had already been dismissed as a fanciful side effect of the space race and a fad for teenage boys. That was until Forbidden Planet touched down. Based on Shakespeare’s The Tempest and starring a fresh-faced Leslie Nielsen, the Oscar-nominated film injected some much-needed Hollywood credibility into the flagging field.

Billed as “Far and away the most provocative and unusual adventure film you’ve ever seen” its influence can be found in the work of every major sci-fi director since. It has the distinction of having a chain of shops named after it and its own spin-off musical – Return to the Forbidden Planet, which the brave folks at Allegro chose to put on this week at the Church Hill Theatre.

A hodgepodge of Shakespearian dialogue, silver space suits and classic hits of the 50s and 60s, Return to the Forbidden Planet tries a little too hard to encapsulate the zeitgeist of an exciting era and fails spectacularly.

In the same vein as the sci-fi pioneers who went before them, however, Allegro have taken their minute budget and thrown all the energy, verve and gold lame they could muster at the project. While lead Laurence Aitken, as the Captain, doesn’t reach the flawless diction required to tackle the verbose script, his vocal performance manages to keep the action in the show moving forward. It is with the support of his confident and talented co-stars that the show really gets into its stride. Charlie Munro’s insane Doctor Prospero verging on magnificent, rubbing deviously well against Laura Jordan Reed’s peppy Science Officer, whose turn in Gloria is possibly the show’s highlight.

Eddie McDowell’s Bosun and Andrew McKay’s lovelorn Cookie make for light-hearted diversions, delivering the sentiment behind their lines favourably. Using large view-screens gives a refreshingly modern twist on the narrator, with Peter Tomassi appearing as a newscaster who provides the audience with relevant updates.

Gliding about the stage in a glittering blur Harry Dozier’s robot Ariel is a vision in silver. With more than a touch of Red Dwarf’s Kryten to his performance Dozier rises to the task of creating the mannerisms of a sympathetic automaton remarkably. His rendition of the Beach Boys’ Good Vibrations alongside the rest of the male cast is excellent.

Musical director Angus Tully extracted a measured performance from his group, moving smoothly through a challenging repertoire. Credit must also go to the band’s technically proficient and highly evocative guitarist.

So skilfully that one could almost forgive Return to the Forbidden Planet its sins. Well, except perhaps for: “What light through yonder airlock breaks?”

Having instructed the audience on the safety and evacuation procedures and having got them ‘on board ‘ the space ship Albatross, the craft set off towards the ‘Forbidden Planet’.

Although the plot is somewhat complicated, the musical numbers moved along with some lively choreography which well suited  the period and which was well executed by an enthusiastic company.

All of the main characters gave good performances but I felt Cookie ( Andrew McKay ) was  particularly flamboyant ,obviously enjoying the part, delivering his musical numbers with verve and energy.

I have to confess that the music was, to me, quite nostalgic and it was a treat to hear a great band supporting such fine solo and chorus singing. The use of excellent lighting and technology, colourful costumes and an effective set enhanced a most dynamic production which oozed vitality from the start right through to the well co-ordinated curtain calls. A great show.