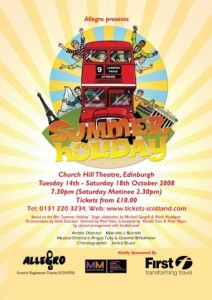 Based on the classic Cliff Richard film, Summer Holiday will transport you back to the swinging sixties as it follows the adventures of bus mechanic Don Preston and his co-workers as they travel across Europe on that famous double-decker London bus. The all-singing, all-dancing show features hit after hit, including Bachelor Boy, Living Doll, The Young Ones, Move It and of course, the title track, We’re all going on a summer holiday…. so why not hot on board and join us for the ride?!

Cast – and a bus – delight crowd

Easing back into the comfort of the Church Hill theatre’s velvety seats, there can be only one question on the audience’s mind; how exactly are the Allegro theatre company going to get the star of the show on stage? While images of drunken divas with nerves may spring to mind for the uninitiated, our hero is, infact, a big red double-decker bus.

Not the old Routemaster that London’s Mayor has been so busy trying to replace, but an AEG Regent with a number nine on the front and Athens as its final destination.

It’s a problem that’s recently been perplexing Allegro too in their preparations to put on Cliff Richard and the Shadows’ classic 1963 musical Summer Holiday.

Formed with the sole intention of entertaining local audiences with under-performed musicals, the company have always stood up well to the trials that productions such as Cabaret, 42nd Street and Blitz bring, but a bus?

It’s a tall order, especially when you consider that the Regent has to cross five countries, take a ferry and put up with the shenanigans of a gang of all singing, all dancing teenagers.

Meeting the challenge head on, however, Allegro has created a set that not only works with the needs of the script but gives the bus a motorised gimmick that delighted the crowd.

Not to be upstaged, the cast put their all into a the pop-tastic tale of four young mechanics leaving England’s inclement weather behind for a little sun, sea, sand and singing.

Yet before the boys can reach their French Riviera paradise, the charms of a stranded girl band headed for Greece and an intriguing American runaway divert their attention.

Reprising Cliff Richard’s role as Don, Jim Duffy seemed to feel the pressure in his first leading role. And although the opening scenes were well supported by vigorous choreography and a perky chorus, there was a distinct lack of confidence in all four lead males that could well be put down to first night nerves.

Rallying the production with some much needed zing, trio Mimsie, Alma and Angie, soon had things looking up and by the second half Edwin, Cecil and Don had relaxed into their roles.

Honourable mentions must go to Eddie McDowell’s well rounded and slick Steve, who stood out as one of the more polished performances in the piece and the conniving Stella and Jerry, played by Laura Jordan Reed and Lech Boron, who may just have stolen the show.

With the able assistance of Erica Birtles’ engaging and likeable Barbara, Duffy was soon belting out Batchelor Boy and Summer Holiday with gusto, ending the evening with an excellent rendition of On The Beach. It was the ensemble wedding scene, however, that pulled the whole cast together, showcasing the talents of everyone involved, particularly Mary O’Gorman’s beautiful soprano, Carmel Downey’s tearful Bride and her four fabulous bridesmaids. Maybe it’s time to turn this particular engine over once again, after all, it is the only bus in Edinburgh guaranteed not to be held up by tram-works.

“It was a lovely night out, just the antidote we needed for all that bad weather we’ve had this summer. I think the girls were lovely and the dancing was superb. Took me right back to the days when I could dance like that. The lead boy was lovely but it took him a wee while to get going.”

“I did enjoy it. The songs were very good. It’s tempted me to go and book a holiday somewhere hot. It’s just a shame it’s so much more convenient to fly these days.”

“The show was excellent. It had something for everyone. The leads were all very good. I particularly like the mechanical bus zooming about and the mother (Laura Jordan Reed) was brilliant, very funny. It was of high standard for amateur dramatics.”

“It was really good. I thought Kenny Miller, who was Cyril, was amazing. I haven’t seen the film but the show and the cast were better than I expected, it was great.”