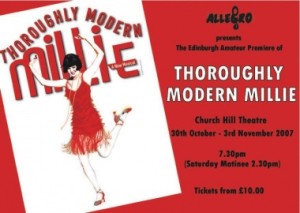 Thoroughly Modern Millie is a high-spirited musical romp that has all of New York dancing the Charleston.

Set in New York City, 1922, Thoroughly Modern Millie tells the story of young Millie Dillmount, who has just moved to the city in search of a new life. It’s New York full of intrigue and jazz – a time when women were entering the workforce and the rules of love and social behaviour were changing forever. Based on the popular movie starring Julie Andrews, the stage version of Thoroughly Modern Mille includes a full score of songs and bright dance numbers.
Filled with frisky flappers, dashing leading men and a dragon lady of a villainous audiences will love to hate, Thoroughly Modern Millie is a perfectly constructed evening of madcap merriment.

Based on the popular film starring Julie Andrews, the stage version included a full score of catchy songs and vibrant dance numbers.

Produced by amateur musical society Allegro, the show followed the story of Millie Dillmount, fresh from her hometown of Salina, Kansas, as she embraces Manhatten full of big and exciting ideas and sets out with her “modern” game plan – to find herself a rich husband.

Along the way Millie makes new friends at the Hotel Priscilla, gets caught up in an unexpected love triangle and helps uncover a white slavery ring being conducted by Hotel Priscilla owner Mrs Meers (Laura Jordan Reed).

In the lead role, Carlynne Gibb sang and danced her way through the show flawlessly, along with her love interest, Jimmy Smith (Jonathan McGarrity), and Reed made her villain that little bit more hateable with her smarmy accent and wicked laugh.

Although the Church Hill is a fairly small theatre, the staging used in the production was elaborate, transforming the space from a bustling office block to a sleazy cocktail lounge to the hotel reception.

While the scenery was impressive, the scene changes were sometimes clumsy and noisy, making it difficult to concentrate on the dialogue. A more minimal set would have sufficed.
Ending the way all good musicals do, with an all-cast singing and dancing showdown Modern Millie may be a lesser known musical but it certainly made for a thoroughly enjoyable evening.